In The Hidden Science of Lost Civilisations: The Source Field Investigations David Wilcock rewrites the Mayan myth. Drawing upon alternative science, as well as cutting-edge quantum physics and consciousness research, Wilcock connects the scientific with lost traditions of ancient wisdom to predict what lies in mankind’s future. THE HIDDEN SCIENCE OF LOST CIVILISATIONS is a guided tour through the most incredible scientific mysteries in the modern world and a rediscovery of an ancient system of physics and spirituality that has since crumbled almost entirely into ruin.

He believes that 2012 will not be the end of the world but will be the start of mankind’s golden period.

What do you think? Will you be joining us to usher in a golden age for mankind, or  are you one of the lucky ones with an invite to an ‘end of the world party’? If so, come Saturday you may well feel like the world has ended. Post-apocalyptic hangover, anyone? Or maybe you  will be jumping into your bunkers this evening and waiting for this all to blow over. If this last one sounds like you, be sure take an e-copy of THE HIDDEN SCIENCE OF LOST CIVILISATIONS with you.

Along with, of course, plenty of tinned food, bottled water, and maybe even some BUM FODDER…

See you in 2013, everyone! Unless the world end before then, in which case… we won’t. 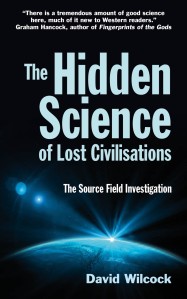 Want all the latest news, offers and giveaways from Souvenir Press? Subscribe to our free monthly newsletter